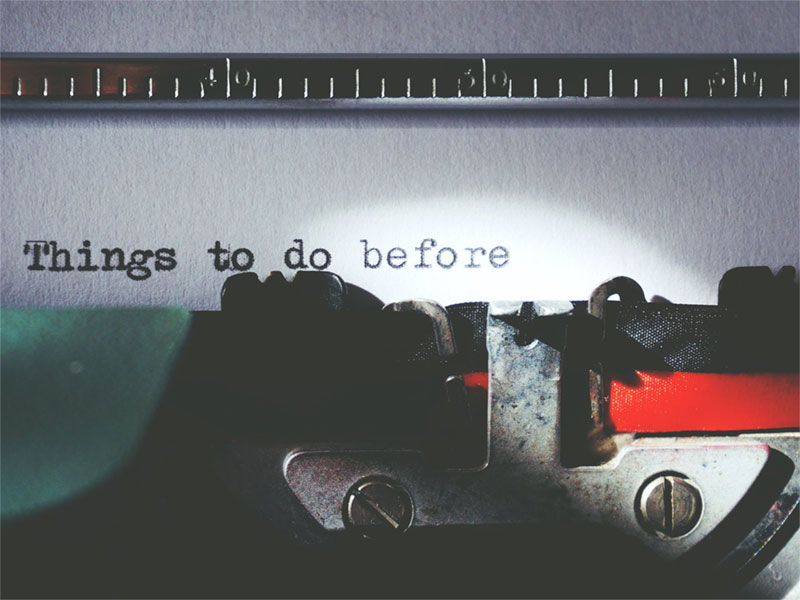 If at each year end like many I make the list, draw a line and do the math on how it went READ HERE and I choose a magic word for the year that begins (this year it’s space), one thing I do instead with regularity, over the course of 12 months, is a list of the things I would regret if I died tomorrow, or in an hour ( although in this case the substance hardly changes!).

The idea is somewhat the same as the resolution list, but it is not related to the transition from one year to the next and is therefore less solemn. It can be written every month or more or less randomly and, therefore, can afford to include even “silly” things.

Today, on the 8th of February, for example, this is my list:

Barbara is my best friend, yes I’m lucky enough to have one, a real one!  We grew up together and since we were ten years old we’ve been a soul in two bodies – as her dear grandfather used to say -, we’ve been classmates for eight years and in those eight years we’ve spent nine hours together every day: five hours at school, almost as many studying together at each other’s houses. And then we spent another good hour on the phone when each of us was alone at home… When you think about it, it’s really incredible how many things we had to say to each other! What was it then? Who can remember! Truth be told, it could still be like that to this day.

After graduating from high school we took different directions, each one choosing the faculty that best suited our inclinations, then came the first boyfriends – she was first – and from there we followed different paths in terms of friendships. As it often happens, life went on and we followed our own directions, so our time together went from eighty percent to twenty percent, then, over time and as things evolved, it slowly continued to shrink and came down to five percent, if not perhaps in certain times much less!

Even going over it today, there’s no real reason really, except maybe lack of time. Aww, time! Sometimes you just blink for a moment and a thousand moments have passed, months have passed, years have passed!

However, what time does not diminish are the feelings when they are strong and deep, in fact, time can often make them even stronger and ensure that almost “magically” remain intact and unchanged.

But back to our list: if I died tomorrow I’d be super happy that that feeling stayed the same, but I’d call myself an asshole because while I recognize the strength of this bond I’m procrastinating it, not nurturing it, and not enjoying it by blaming it on all the things I have to do and the days you get up in the morning and go to bed at night and don’t really have a clue what happened in the meantime… but in making my list I know that these excuses and alibis are not enough to support my defense! And so I admit, I am guilty!

Ok acknowledged my “guilt” I don’t stop, I want to make it useful, I want to bring it into the doing! The solution is to find an action that satisfies the question, “How could I be happy if I died tomorrow?”

I can (and therefore must!) call her and offer her a weekly scheduled appointment. If we are able to do this for a whole list of things we give a damn about, why leave out those that are more important to us? If it’s the matter of duty before pleasure, let’s remember that giving us pleasure is our duty.

And there you have the first CALL TO ACTION on my “if I died tomorrow” list set.

I’ve been wanting to take advantage of the space I have for a long time to put up beehives. Now that the chickens have their nice new home, it’s time to think about the bees.

> CALL TO ACTION > Enquiring on what needs to be done, setting it as a goal and putting it on the agenda.

> CALL TO ACTION > fix at least 1 hour a day of outdoor activity, walk in the country, in the woods, move around on my bike also when running errands.

> CALL TO ACTION > Set a goal of an average of 4 books a month and read! I have learned techniques that allow me to do this, someday I will share them with you too ;).

From being the smart worker that I have been for a long time, I want to transform myself into a hybrid worker (halfway between a worker and a holidaymaker), and set myself on the move as a true citizen of the world, choosing different views to admire from the window (while working) in different seasons.

> CALL TO ACTION > wait for them to open the cages and then mark a spot on the map and set the countdown to start. This one involves longer lead times but in the meantime I plant the seed in my head.

I’ll stop here for now, but I will be sure to update you as the list evolves.

But beyond my reasoning and my (more or less) short-term goals, why did I want to share this list?

Because it may be a good entry level for more generalized considerations, such as:

The list doesn’t include anything that occupies my day, seven days a week, such as:

And there aren’t even things that are considered extraordinary in nature:

What am I learning with all of this?

That Phil Ham, UK country manager for The North Face at the time I was also working there, was right. Phil said, “Rest assured that on your deathbed you won’t regret not getting your house in order!”.

He’ s right I know and I knew it even then!

To prove his point, all I need to think about is how whenever I feel like I’ve done something important for me, I say out loud, “I might as well die now!”, and it’s never happened in front of a nicely made bed or a freshly tidied house….

Despite all my awareness, I still can’t leave a mess around, however, I can learn to consistently recognize and list the things that are important to me and take action on those more or less as promptly.

Focusing on priorities for me and not leaving behind (through carelessness, laziness, habit, routine…) so many great little things that underneath make me feel good, with a capital “B”! That’s why I occasionally feel the need to write down my “if I died tomorrow” list.

Is it the same for you?