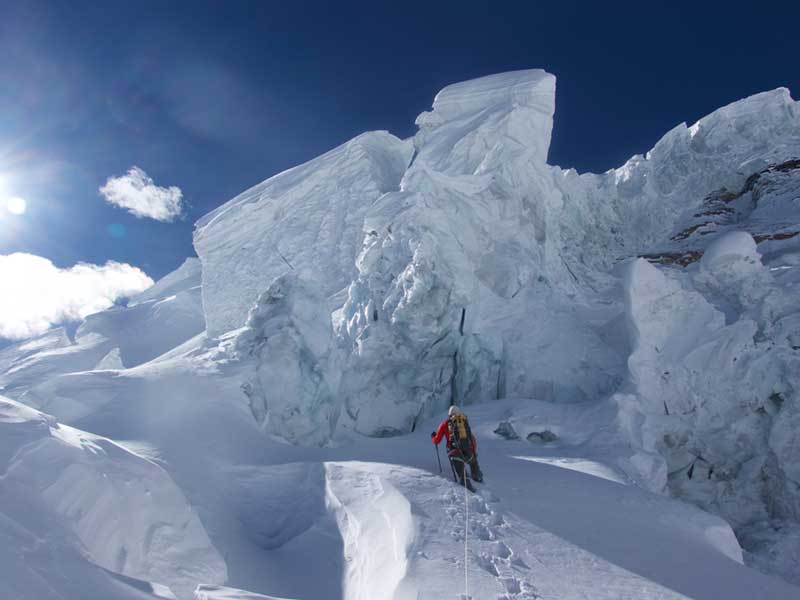 The ascent of Manaslu, the eighth highest mountain in the world.

The mountaineer from Bergamo attempts the ascent in winter of the mountain in Nepal for his third time: the first time in 2015 with Tamara Lunger, the second in 2018 with Pemba Sherpa.

Simone Moro announces the destination of his upcoming winter expedition: the ascent of Manaslu, a mountain located in central Nepal in the Himalayas, whose highest peak reaches 8,163 meters, representing the eighth highest mountain in the world.

This is the third attempt for Moro and, as for the attempt of 2015, together with Tamara Lunger, alpinist from South Tyrol and of 2018 with the Nepalese Pemba Gelje Sherpa, again the winter expedition to Manaslu in January and February wants to be exactly an attempt of modern revisiting of two great climbs of the past.

Both past attempts in 2015 and 2018 failed due to the amount of snow falling in a few days that made climbing impossible. After 51 days of waiting for conditions to improve, Simone wrote: “An expedition is never just a pure performance, a climb made with your heart in your throat. It is often a game of patience and nerves and I think we really did everything to give the time and the mountain to cover itself with snow and get swept by the wind. But this waiting hasn’t changed anything now and we have lost a lot of mountaineering material and spent hours, whole days shoveling. This adventure is simply postponed”.

Simone Moro has to his credit 18 winter expeditions to different mountains and regions of the planet, thus relaunching the attention and winter exploration on the 8000, after the fantastic season of the first ascents made by the Poles in the ´80s. Only he has reached 4 peaks of 8000 meters in full winter season: Shisha Pangma 8027 meters in 2005, Makalu 8463 meters in 2009 and Gasherbrum 2 in 2011, Nanga Parbat in 2016.

The first winter ascent of the mountain climbed on the 12 January 1984 by the two Polish climbers Maciej Berbeka and Ryszard Gajewski, as well as the link up of the ascent in succession of the peaks of Manaslu’s massif: the East Pinnacle, 7992 metres high and the main summit of 8163 meters.

This last climb was achieved by the two great Polish alpinists Jerzy Kukuckzka and Artur Heizer on the 10th of November 1986.

A winter ascent on an 8000m peak and the link up of two summits are already historic ascents as it is, and represent some of the most exciting ways of fully experiencing mountaineering’s explorative and adventurous action.

The current re-enactment of those two different, exceptional ascents, tries to reintroduce them, bringing attention to two important aspects. The winter attempt comes from the idea of undertaking the climb respecting the strict parameters which make up a winter ascent, mentioned above, and that is to not reach base camp before the 21st of December.

The 1984 ascent was achieved setting off from Poland mid-November, on the 2 December base camp was set up and on the 21 December, first day of astronomic winter, camp III had been set  up at an altitude of 7100  meters.  Therefore, it was not a “complete” winter expedition even if  the summit had been reached respecting the astronomiccalendar.

Manaslu’s first complete winter expedition and climb has not yet been achieved and for the same reasons it is still waiting to be achieved on another three 8000meter peaks, and that is Dhaulagiri 8167 m, Kanchenjunga 8586 m, Lhotse 8516 m.

In addition, Everest also lacks the first complete winter ascent without oxygen. The K2 of 8611 m remains the only summit without any kind of climbing on the summit, carried out in winter and is therefore still virgin in this season. This year as many as 50 mountaineers will attempt the winter ascent.

“I have never loved to leave projects open and unfinished. I know how to lose and accept defeats but I have never given up motivation on a project until it is closed and completed.” Declares Simone Moro. “So, I will return to Manaslu in winter for the third time, as I did for Nanga Parbat before summiting it. It could also be another historical achievement. For me It would be my 5th winter climb and nobody has ever climbed so many 8000 in the winter season. The climbing route will be determined in base camp in order to carefully evaluate the mountain and the snow conditions.”

The Athlete and the Company: a third brand squared

Once again I want to confirm that I love them!