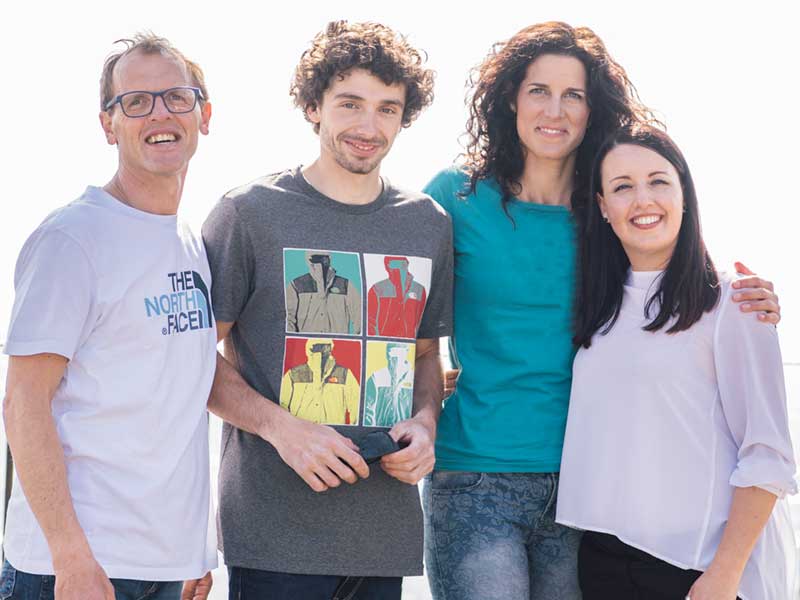 “In our case, it is essential that the team is cohesive and operates well because in moments of high tension and anxiety, where in danger is not only a professional project but much more, i.e. the very existence of the people around whom it revolves, time must bring into play rather high problem solving skills and the whole team must prove autonomy and to be responsive and supportive. […]”

This I wrote in 2017 in the book “Devo perché posso” (I have to because I can) that I worked on four hands with Simone Moro.

We were just back from the winter expedition to Kangchenjunga, an expedition in which he and Tamara chose not to have satellite for data network coverage… and so, for the first time in a long time, we could not communicate regularly and did so only for extraordinary updates.

Behind the scenes, this caused a great discomfort; beyond the issues of communicating with the outside world, there were the more important issues of knowing more or less exactly where they were and what they were doing at all times, or almost.

We had become used to being able to communicate with a certain regularity in previous expeditions and, suddenly, we found ourselves like the parents of the last generation of children without cell phones: those who, when their children left home, could not know where they were really going and what they were really doing, but above all whether they were well or not.It was disorienting and at one point we even lost the famous ten years of life…

“On May 25, 2017, the day of the ascent from camp 3 to camp 4, the tracker stopped at about 6900 meters at 7:30 am, and for the rest of the day it gave no other information. We of the team, who follow Simone as much as possible, step by step, know that this is a strange fact and the more hours passed, the more it was worrying. However, in order not to burden anyone with our anxieties, we didn’t give any signal to each other. This was until 15:00 when Barbara (Simone’s wife) called me asking: “What’s going on? […]”

The story ended well. And after Kangchenjunga we experienced other winter expeditions: the Pobeda in Siberia in 2018, the Manaslu in Nepal in 2019/20 and here we are in 2021 with the Manaslu (Nepal) again for Simone and the K2 (Pakistan) for Tamara; again also with the network connection but, in any case, never anyway with the possibility to talk properly – obvious no?

And most importantly, again, with a weekend (the one we just left behind), topsy-turvy… much like the day we experienced on May 25, 2017, with a media cancan honoring the Nepalese team’s K2 summit success, and news from Simone (from Pakistan) that something bad had happened to Sergi Mingote, a climber we knew for sure to be with Tamara.  And, above all, no news from Tamara.

I love my athletes like crazy: and this is a real declaration. I say this with the load of tension still on me, the fear that daily coexists with the strong hope and as a background to all this the knowledge that they are fine doing what they do. Without this awareness I could never bear such a high load of worry, I could never have thought of activating such a high level of self-control, enduring the disappointment of the handling of the news – sometimes true and sometimes alleged – by the media (not all of them for goodness sake!). This awareness and the love and dedication I have for what I do has led me to evolve to the point where I am able, by duty of my role, to be able to report neutrally/rationally (with facts and not emotions) to a world to which this is owed and simultaneously be able to keep the focus on their mental and physical well-being, thousands of miles away while protecting them as much as possible from all the disturbing voices.

Once again I want to confirm that I love them!

Tamara is doing well and although with a weight on her heart, she is not giving up on her dream of trying to climb K2 in winter.

Simone is doing well and, on his third attempt on Manaslu, is more determined than ever to climb his fifth eighth thousand meter mountain in winter.

And I’ve experienced a sort of calm after the storm here this week, again 100% centered and ready to do my job, knowing that my goal and desire when they are on the expedition is only one: to be supportive, to be close to them, to be by their side.

True is that social distancing is outdated stuff for us! 😉 for quite some time now.