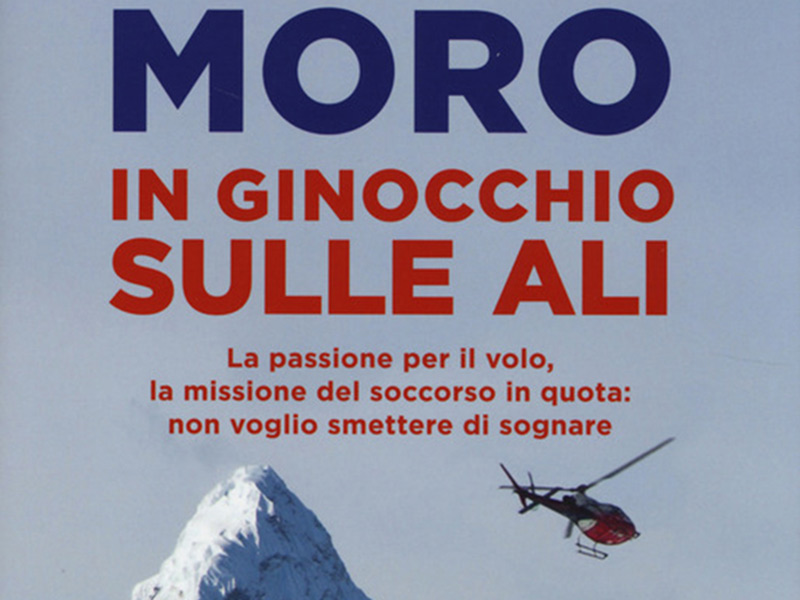 “On the 26th December of 1997, the day I was rescued, I realised many things about the role a helicopter and pilots at high altitude have. The first which is the most important, is that they saved my life.”

It was probably at the end of 1997 that he experienced the most tragic moment of his life, when he walked down from Annapurna bruised and bleeding, where an avalanche tore two of his climbing partners away from him. Or maybe it was a year later, when he flew to the ex USSR on an MI-17, a huge loud beast covered in Cyrillic writing.

Simone Moro does not remember the exact moment that something clicked inside him, but he knows for certain that what he describes with enthusiasm and commotion in this book is an intense and overwhelming passion.

It’s not simple to define it in words: it brings together the vertigo of flying, the call of the highest peaks on earth with the personal challenge and the wish to help others.

Simone though has managed to bring all this together in a very tangible way, buying a helicopter out of his own pocket (not something you do light heartedly if you’re not a magnate…) and organizing a helicopter service in Nepal aimed at helping, above all, the local population living in the most remote valleys.

His detailed knowledge of the Himalayan region, his experience as an alpinist and his competence as a pilot all contributed and will contribute in the future to saving many lives which are put in danger by a simple fracture or a difficult childbirth, when in an environment which can be as fascinating as it can be hostile sometimes.

That is how, as Reinhold Messner emphasises in his preface, Simone Moro –who to this day continues his amazing mountaineering career – has found a meaning to his present and his future. A mission which combines adventure and solidarity, emotion and humanity, as the many breathtaking stories narrate in Hovering in Thin Air.

The eight-thousander, happiness and I