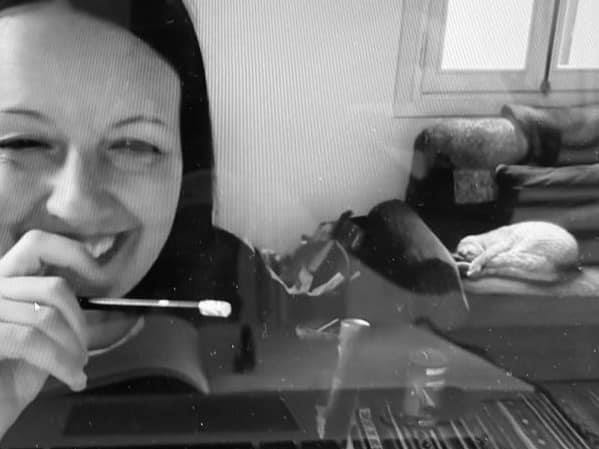 And, after 12 months of zoom calls (and various other…), what is still relevant?

Let’s say that we have learned to wait, a little bit as boiled frogs, a little bit because there is always some hope that ” tomorrow will be better”. ( otherwise what do you do?).

I will share and reread it again as well.

I’ve written this post three times and three times I’ve deleted it, despite letting it soak overnight each time.

I’ve been asked to write here on this page “Because it’s noticeable that you’re silent and maybe you should say something since you’re in the communication business.”

I am one who did not easily accept “staying home”.

While being a lucky one today. Smart working is not new to me. It’s only been a year and a half since I’ve had an office outside of my home.

Ten years ago I had wanted a home office, because it didn’t make sense to me to pay rent for an office when I had a house big enough to fit one in. And I’ll say it: I was considered a loser!

Now, however, I have an advantage since smart working is normal for me:

I am technologically equipped, and I am mentally structured to be able to manage space and time to work from home (e.g., I already know how important it is to give myself hours and not put myself in front of the computer in my pajamas).

If we’re talking about communication today, I don’t feel like I have anything good to say. I’m looking at what’s happening, and I realize that the rules that were valid until pre-emergency are now worth less, and in a while they’ll be zeroed out. What about after that? I don’t know.

I love my athletes because in their own small way they try to make a contribution by giving away what they can give away.  They are invited by companies to give value as “public figures who can incite, lead, inspire.”

My only suggestion to them is to do what they authentically feel like doing, what they feel is a real contribution from the experience of athletes and the current context of adapting needs and habits. With something of substance, that will actually serve. Not with anything else that is redundant.

Today, being forced to stay in, and to stop, I think it’s also good for us to realize that not only do we don’t lack anything, we are literally overflowing with everything.

Instead, in this already narrow existential space, we are risking to behave like crazy bulimics, supplying ourselves with both real and virtual products as if they were the solution to everything even though we know that they won’t be.

Good thing we had been working for a while already on reconnecting with ourselves, with nature, and learning from animals.

Nature and animals teach us one thing above all: that there is a time for waiting. The one in which everything happens. And, in case of danger, that waiting means being still and silent.

Instead, here we are in call-meetings, respectfully smart working….

Luckily, we burst out laughing at one point:

us analyzing the situation, commenting on news and protocols (from two different countries), talking about work plans for the coming weeks and for a dunno-future, while he, an animal, is in the back sleeping blissfully on the couch. A window onto another.

I’m glad we’re noticing this. Because in my opinion, these are the things we need to notice now. And, possibly, laugh about it.

We all have fear, fear for today and fear for tomorrow. We all feel troubled, but I think it’s important to take stock of the real difficulties, as opposed to the perceived difficulties. Focusing on the former also means finding solutions. On the perceived ones, we must necessarily postpone.

Let’s postpone and learn about waiting. We’ll draw conclusions about this global and democratic apocalypse later. Let’s do it later, seriously, without wandering off. But after, not before.

Restarting from us training resilience

The perfect recipe for smartening up a work team: